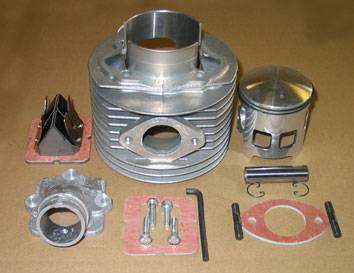 Ray Kemp of AF Rayspeed working closely with motorcycle ace tuner and engine designer Terry Shepherd developed the TS1 kit. Two years of dedicated research and trial went in to producing the design. The combined tuning knowledge and track experience of these two was matched only by the risk taken by Rayspeed to develop the TS1. The investment of time and capital in the design ensured that Rayspeed would share its fate.

The TS1 received its public debut at Rayspeed’s first open day. An estimated five thousand scooterists and interested parties turned out (although more claim to have been there) to witness an event that neither health and safety or the insurance could possibly have anticipated. The A64 was closed by the volume of people crowded on to each side of the road leaving a gap down the centre of only a couple of yards. Ray hurtled through the centre of this gap on the first bike to receive a TS1 Conversion. The demonstration was repeated several times that day. The effect of this and the adrenaline filled reports of those who have ridden a TS1 have made the TS1 the success it has become.

In that time the TS1 has proven itself on the track as the choice for group six racers, and demonstrated remarkable reliability and longevity on the road with many owners exceeding twenty thousand thrill filled rally going miles before even replacing a piston. It has gained an indomitable reputation for providing blistering speed with practically unseizeable reliability.

In testing the TS1 200 kit fitted to a standard GP200, with no additional tuning or engine modifications (except a 48mm Fresco Expansion System and a 34mm Amal Carburettor) produced amazing results. Riding prone the machine rocketed to 92 mph at 8700rpm.

Due to the increased power output and higher rpm achieved by the TS1 engine it was clear that other parts of the engine need to be uprated in order to guarantee the reliability of the engine. The most important of these is the crankshaft. But we also advise the fitting of competition clutch springs, an Aluminium Top Chain Guide and Hi Load Bearings.

The TS1 Cylinder is an all aluminium casting with Nikasil plated bore, reed valve induction and a bridged transfer layout. 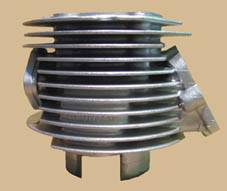 The manufacture of the cylinder is carried out by Gilardoni Spa. With some 40 years of experience producing aluminium cylinders with plated bores for the motorcycle industry their reputation for top quality is outstanding. The majority of their business being the supply of standard cylinders to many Italian motorcycle manufactures.

Nikasil Plating (nickel silicon-carbide plating) was originally developed by Mercedes for the plating of their rotary engines, and is still used by Porsche in their top performance cars. Nikasil is now in common use in two stroke aluminium cylinders. The coating has outstanding wear resistance with exceptional oil retention and heat transfer characteristics. This gives the TS1 cylinders the remarkable durability they have become so renound for. Impressive for a plating that is only 0.003’’ thick.

The Pistons used in both of the TS1 kits are produced by Asso Werke. Their reputation is second to none; they produce performance pistons for the likes of Ferrari, and have been providing standard pistons for the lambretta engine since the 60’s. Rayspeed asked Asso Werke to produce the pistons for the TS1 based on their track record and knowledge in the field. The results have proved exceptional. 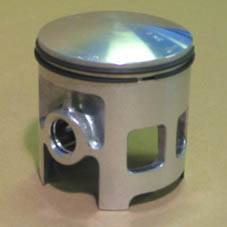 The reed valve induction is what gives the TS1 its character; it consists of a reed block, petals and petal stops. The reed valve positioned between the carburettor and the inlet controls the amount of fuel air mixture entering the cylinder. This concept was first put in to a production bike by Yamaha in 1972 with their ‘Torque Induction’ system.

As the piston in your engine travels up the cylinder, it creates a low-pressure area in the crankcase. It is now that the reed valves open and the air/fuel mixture (charge) is drawn through the carburettor and into the crankcase. As the piston travels down, crankcase pressure increases causing the reed valves to close and preventing the charge from escaping back through the carburettor. The charge is then forced to pass through the transfer ports and into the combustion chamber.

A traditional cylinder without a reed block when tuned for hi rpm performance will have a long inlet duration. At high rpm this will allow quick and efficient filling of the crankcase with mixture. However this long inlet duration will mean that at lower rpm the fuel air mixture will be drawn in to the crankcase as the piston travels up the bore then as it descends again it will push the mixture back out again. The mixture is forced back through the carburettor where it will draw another quantity of fuel before being pulled back in to the crankcase. This very rich mixture is what causes the low speed ‘blubbers’ common in high performance engines. 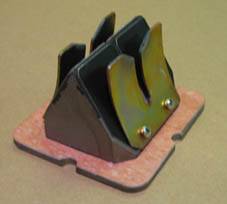 A major benefit of the reed induction system is that the opening and closing of the reed valves is not fixed like the inlet port timing, but is controlled by the airflow demands of the engine. The reed valve acts as a pressure activated one-way valve permitting the air/fuel mixture to flow into the crankcase and keep it there, this feature makes the TS1 extremely responsive to the needs of the engine as the rpms increase or decrease. Reed valve induction allows the TS1 to utilise long inlet duration (360 degree) for high rpm performance whilst maintaining efficient low rpm combustion. Terry Shepherds hand was especially noticeable here as his credentials in Yamaha tuning gave him insight in to the desirable characteristics of the reed valve and how to obtain them. His modification to the design of the YPVS (Yamaha) reed valve created the TS1 Reed Valve, which offered increased fuel flow in to the cylinder. He subsequently used TS1 Reed valves in all his race YPVS engines. 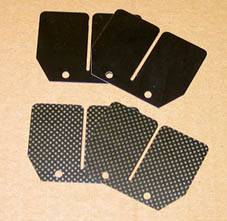 The choice of petals for the TS1 kit has changed over the years the kit has been available in response to the development of new materials. Currently Rayspeed use two materials Vetronite, and Carbon fibre. The standard petals supplied with the TS1 are vetronite, and have been chosen because of their excellent lifespan and wide rpm performance, making them the best choice for most TS1 riders. The carbon fibre petals are stiffer than the std petals this makes them better suited to very high rpm machines. These petals are better suited to expert riders who can make use of the narrow powerband, high power characteristics of a race tuned engine.

Transfer ports are one of the most important aspects of the TS1 design and the performance it affords. The primary purpose of the transfer port is to deliver the fuel air mixture from the crankcase in to the cylinder. The TS1 transfers were designed with the optimum duration, width and outlet angle to ensure they provide cooling to the crown of the piston whilst aiding in the removal of exhaust gas from the cylinder as well as ensuring the combustion chamber is efficiently filled with fresh fuel air mixture in the whole rpm range of the cylinder.

The design of the TS1 Transfers has proved to be so capable that it has remained unchanged in our Rapido kits. The TS1 kit also incorporates a boost or scavenger port cut from the inlet to the height of the transfers so effectively acting as an additional transfer outlet directly from the inlet port in to the cylinder. This port would not be possible in a conventional non reed block cylinder. 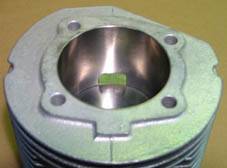 No single aspect of the TS1 Kit is responsible for the remarkable performance and reliability it can bring to the Lambretta engine, it is the combination all the features of the TS1 design and also the rest of the engine it is attached to. The kit should be fitted in conjunction with an Expansion System, an Open Carburettor and uprated engine components.

Please ensure any fields marked in red are filled in correctly